When we think about technology, we tend to think of the bustling startup world, the groundbreaking innovations and the advancements in computer processors and machine capabilities – what we don’t think about is the news.

When looking at the state of the media and news distribution, it’s easy to see that the industry has gone through a rapid transformation in the past few years due to the integration of technology and innovation. Today, fewer and fewer newspapers exist and many credit the current generation, however an American Press Institute report found that 85% of millennials (adults aged 18-34) said that it was somewhat important to them to keep up with the news, and 69% of millennials consumed news pieces at least once a day.

So where are millennials consuming news? How are they impacted by technology? And is the change for the better?

Until not that long ago, in order to be ‘in the know’, one needed to set time aside to read the paper, listen to the radio or watch the nightly news. Today, news is constantly available anywhere, anytime and in any format thanks to the explosive infiltration of social networks and technology. As a result, news consumption today is drastically different and will likely continue to change as technology evolves.

According to the Pew Research Center, 62% of adults get their news on social media sites that are not dedicated to providing news, but that are content focused. This means that when users visit sites such as Reddit, Facebook, Tumblr and more, they are exposed to news whether they like it or not. This shift in the location of news consumption has weakened the position of traditional news sources and strengthened the social network sites for whom news sources have had to change their marketing and outreach strategies.

A Shift in How

Beyond social media becoming the primary source from where individuals consume news, the format of news consumption has changed 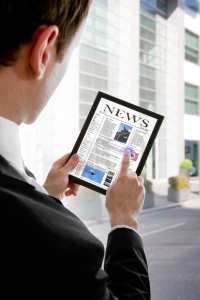 due to the rise of technology. Today, more and more adults rely on mobile devices in order to consume news, whether on dedicated sites or through social media networks, and as a result, the way the news is presented to the readers has changed.

Today consumers want to consume their news quickly and efficiently – often meaning in less than 140 characters or 30 second snippets. The rising popularity of video and live-stream technology have further challenged the news industry, as video is quickly rising to be the most shared and consumed content on social media sites. Recognizing this, 79% of senior executives in the news industry reported that they would be investing more in the creation and distribution of video content across digital channels – a change that will surely impact news consumption even further in the years to come.

Live-streaming technologies are not only increasing in popularity organically, but deliberately by social networks. In an effort to increase in-site content consumption and transfer traffic to their own site, Facebook has entered into contracts with celebrities and leading news sources in order to utilize the Facebook Live video feature. A total of 140 contracts worth over $50 million are estimated to have been signed between Facebook and companies like CNN, the New York Times, BuzzFeed and more.

Benefits of the News Revolution

The change technology has had on the news and media industry has opened up the access to information for people worldwide. Today, consumers can easily access and share information thanks to the rise of technology and social media sites. The access consumers have to news has also widened the opinions people are exposed to. Over 86% of millennials reported seeing diverse opinions on social media sites, giving them the opportunity to formulate their own opinions and have access to more knowledge in order to obtain a comprehensive understanding of news situations.

The rise of social networks and the increased reliance consumers have on brands they trust has opened the gateways for many enterprises who are not in the new industry to benefit from the rise of consumption.

Drawbacks of the Change

Despite the access to opposing viewpoints, the rising popularity of social media sites and use of technology have caused the phenomenon of fake news to come into the spotlight. When relying on objective news outlets to 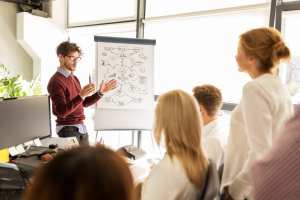 consume news, it was expected that everything one read, heard or saw was verified and deemed accurate. The ease with which anyone can upload videos, create articles or distribute content through ad networks and social media channels has made it increasingly difficult to recognize what news information is real and what is the fabric of the creator’s imagination.

Unlike previously, where news sources had to be accountable for the validity of the information that was distributed, today social media enterprises and tech giants are being held accountable as the ones that need to come up with a solution.

In 2016, Google removed 1.7 billion ads, took action against 340 sites and banned 200 publishers who violated Google’s policies and misrepresented information. Facebook, who has been under scrutiny for suppressing news and altering the trending news section, announced a series of tools to help reduce the distribution of fake news on the site, however they are only temporary solutions.

The Future of News

As a result of the reliance on technology and the change in news consumption sources, there is an increased need for solutions that validate and verify information distributed across social channels. The responsibility for news distribution has therefore shifted from the hands of the reporters to the startups whose sites distribute the content.

While many companies have begun putting policies in place that facilitate reporting of fake news and monitoring of shared content, a flawless solution is still lacking. Until one is found, news consumers are the ones who need to verify the sources from which they consume news and double check the validity of the click-baits they see on social media sites (and maybe once in a while pick up a newspaper or turn on the TV).

#prooVinsights Report: How Innovation is Shaping the Future of Banking

Startup? 6 Simple Steps to Secure Your Next PoC

Who is Benefitting from RegTech?