For each of the last ten years, the United Kingdom has been ranked inside the top ten most innovative nations in the world according to the Global Innovation Index.

In 2017, the UK took 5th place. So what is it that makes the the country so innovative?

Human capital and research was an area where the UK scored particularly highly, especially in the quality of universities in the country and expenditure on R&D.

This is coupled with a high ranking on digital infrastructure, with the country ranked the best in the world in terms of online e-participation.

London is a particularly fertile ground for startups. In addition to being the home of several world renowned universities and attracting talent from around the world, it also harbors a wealth of accelerators, incubators and both financial and legal support that help startups to grow.

Some of the most prominent startup ecosystems emerging in London include:

The capital city has a number of startup ecosystems that rival any in the world. It is one of the leading global financial centers, and as a result, its FinTech scene is up there with the best.

The city has more than 300,000 people working in financial services, with FinTech startups raising $1.3 billion in venture capital in 2017. This entrepreneurial charge has been led by local unicorns such as TransferWise and Monzo.

Closely related to this financial services stronghold is a burgeoning blockchain startup scene. London is one of the biggest hubs for blockchain startups in the world today. It counts startups such as Blockchain.com among its success stories, which raised tens of millions in 2017.

There are roughly 80,000 people employed in the London advertising sector. It’s home both to global advertising giants such as AMB BBDO and some of the world’s most creative talent.

As such a successful startup ecosystem in the sector has emerged, with digital advertising startup LoopMe leading the way with a $10 million funding round last year.

While London is the epicenter of the UK startup scene, there are entrepreneurial hubs across the country.

A KPMG report shows that the most prominent hubs outside of London are in the South East of the country.

The hottest tech cluster in the UK outside of London Town was found in the small town of Wokingham, which is home to numerous multinational corporations based in the Thames Valley and Sutton Business Parks.

The report highlighted the connection between investing in infrastructure and a flourishing startup culture.

“The top 10 tech clusters [are] close to the M4, M3 or M25 motorways – all providing easy access to Heathrow Airport and Gatwick Airport.”

A similar report from Tech City UK came to a similar conclusion. It identified 27 digital tech clusters around the UK, with London and the Thames Valley region dominating, both in terms of the number of startups and the people employed at them. 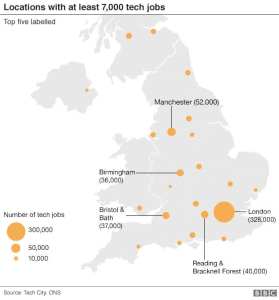 That should not prevent enterprises from looking elsewhere in the country, however.

With niche clusters emerging around world class universities in cities such as Oxford, Cambridge, Manchester, Birmingham and Edinburgh. These cities have developed strong clusters in areas such as BioTech, advanced manufacturing and financial services.

Ultimately, as the Global Innovation Index highlights, the UK is a fantastic place for innovation, and its thriving startup scene is a good reflection of that. The Centre for Entrepreneurs recently revealed that nearly 600,000 startups were created across the UK in 2017.

Will you be in London for the Gartner AADI Summit?

The Most Important Thing CINOs Can Do to Prevent Innovation Silos

How to Position Your Startup to Impress Chief Innovation Officers